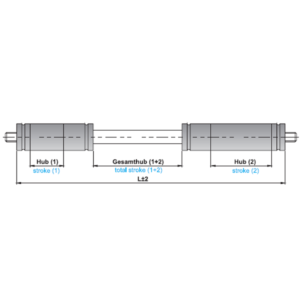 This gas spring is equipped with two cylinders charged at different forces which thus cover two force ranges.
These springs are mainly used on heavy flaps with large opening angles, as in such cases a low starting force and a high ending force is required.
The compression of the spring causes a jumping progression curve which adjusts much better to the flap´s power course.

Figure 1:
In extended position only a low spring force is required as the point of gravity S is located very near to the pivot point.

Figure 2:
In this position half of the flap´s weight is effective. The gas spring´s shorter side is compressed, the force of the other cylinder takes effect.

Figure 3:
In horizontal position the gas spring is compressed. Depending on the flap´s weight the first cylinder is adjusted to range “a”, the second to range “b”.